Thank you Dana and everyone involved in this Mapping of milieux around the whole Czech Republic.

I am Ewa Jacobsson, a visual artist, composer and sound artist. I also come as a curator from Harpefoss Kunstarena in this setting, and as a representative from Norway in the Cartography Project.

My initiative to connect a way of working and thinking with a milieu in Norway and a milieu in Czechia is based on my own experience with how people who work under the radar of official recognition and with a long passionate interest in certain themes is absolutely necessary for a living culture and a living local community. And local communities make a whole country and gather communication abroad.

It is like a Mycelium, a growth under the earth, and it connects people and places in often unexpected ways. One of my biologist colleagues told me once that the biggest living organism on earth is a mycelium, a fungus — a mushroom — mould.

A mycelium organism grows unseen until it one day perhaps shoots up through the earth in spectacular variations and colours — edible, disturbing or poisonous.

Our time is obsessed with transparence and planning and projects that are trimmed to be seen before they begin. The spectacular and visible is more important than the process, and the people who invest time and heart in something must quickly be styled in to place.

What I have met in Harpefoss Kunstarena in Norway, and also in my meetings with Czechia through many years made me wonder if a connection between them would be fertile and nice.

I was at The Hermit Foundation, in Plasy, where I worked with a preparation of a room and performance. In the Center for Contemporary arts in Prague and Čimelice I prepared an old storehouse for corn that later had been used as gym for schoolgirls. I worked with sound and local objects and made drawings directly on the walls,. In Školská 28 I made a performance with local sounds, materials, objects and also a text for Frontiers of Solitude.

And at Harpefoss I made a preparation with local objects, local sound, acting. And now I am involved in a little group constructing a Manual for Residences there. We are a composer, an architect, an author, a visual artist and sound artist, a thinker and initiative-maker, — and for the building that starts this autumn — the local authorities.

My way of connecting to the actual site, collecting both physical and sound items, the local people, the local store and waste I find, makes it natural for me to think about every site as a gift and rich in local materials and possibilities. But I am an artist, that is my skill, so I bring my experience and thoughts to a site.

In 2019 I was in Prague again, and I mentioned the idea of connecting the milieux in Norway and the Czech Republic as I knew them, Michal and I were walking to a film-screening. We talked about how Agosto Foundation could apply, and there was an upcoming deadline just then.

And then Dana Recmanová and Daša Šubrtová came to me in Oslo and to Harpefoss in 2020, we met Eivind Slettemeås in Oslo, and then they travelled to Harpefoss, a long travel from Oslo through winter-Norway up to Harpefoss in Gudbrandsdalen.

But then Covid came, and the physical meetings and the normal way of things eroded and all changed.

So I am happy to be here now, and although things did not turn out as planned, the amount of local initiatives, the mapping of the whole Czech Republic, all districts represented in all their varieties is impressive. Perhaps it is a start, as Dana Recmanova mentioned, of a process, a mycelium beginning to grow. Hopefully also with spores hyfaes and threads to Norway and Harpefoss.

There is in fact an exhibition opening at Harpefoss Kunstarena the 25th of June, called “Mycelium” …

I want to mention two concepts in the end: Density and Distance.

Density: The Czech republic is a part of Central Europe’s deep history, the floods of water and of knowledge, art, science, culture, languages flow to and from Czechia and the other countries. And conflicts has and will involve a country in the middle of Europe. You can connect physically with people from all districts, and abroad, and have meetings in between. You are used to always having a dialogue with many people and arts and sciences. You write books and articles about everything! The density in the culture is huge. The density in culture is like a wet grassland you walk through with boots. Not easy to understand the layers and roots under you, nor easy to actually see.

So to make a mapping as we see here, in Czechia, where we can travel by train or car for a meeting is not possible. Easy meetings is not possible. But the process Harpefoss Hotell Kunstarena and others have started in Norway is just this: to build up a local community around an art scene, to connect to local forces, and to work experimentally and courageous in a perhaps traditional and slow moving site.

So local communities can be utterly important, and perhaps a process like we see here can be survival kits.

To connect inwards in the region, and invite outwards to the whole country and abroad.

Time and patience. The distance in culture is a structure that is like layers of mountain sediments under you, not easily moved nor easy to actually see.

Our countries have spectacular mountains and landscapes, and climate variations. Norway also has the sea, the fjords, the harshness of nature, where the Czech Republic has a rich farmland, a fertile earth that easily gives.

Both countries have resources in this nature that has been heavily misused.

It is as if the stunning strength and the meaning of earth’s beauty and richness makes us humans beasts.

We slaughter what we are meant to take care of and live from. 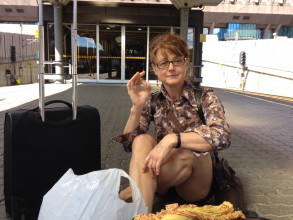 Ewa Jacobsson is a visual artist, composer and sound artist. She has been sound collecting since the early 80s. She also collects visual castaway elements from actual sites, and uses materials such as marzipan, oil, steel, wire, photographs, drawings. Her work includes site-specific installations with visuals, sound and preparation of spaces, pure sound composition, physical sounding objects and live performance at exhibitions, museums, concert spaces and in other contexts, including works for public spaces or participatory works. Advanced techniques and materials combined with the low-tech is a reflection of her interest in the transmission of importance and meaning, existentially or politically, through different media, ignoring the hierarchies commonly used.