Summary: In the title of the project, two lines which you and Frank van de Ven have connected are intertwined. Can you describe the genealogy of thinking that created the impetus for the organisation of regular workshops in the Czech landscape during the 1994 workshop in Archa?

The decisive factor was the fact that we met, and also the fact that each of us had our own history. Leaving aside the years before 1989, starting in 1990 I taught at the Academy of Fine Arts in Prague, where I was the head of the atelier of drawing with a conceptual focus. But the real atelier for me has always been the landscape. So pretty soon, in fact immediately, I found myself in a kind of bifurcation: on the one hand there was the pedagogical practice growing out of the mindset of a classical atelier (and it was an atelier in the most generous sense of the word), then the process of finding oneself and finding an artistic language through individual paths, and in between the embryo of a collective search for the relationship between man and the earth. 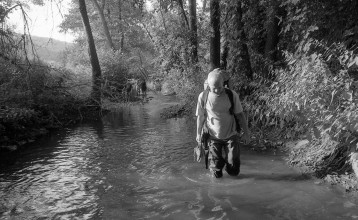 Miloš Vojtěchovský (1955) is a curator, art historian, audiovisual artist, critic, educator and publisher of experimental music. With Peter Cusack, he founded the sonicity.cz project dedicated to the psychogeography and soundscapes of Prague. Curator of the Czech section of the project Soundexchange. Collaborated on the preparation and programme of the symposium and festival vs. Interpretation. Initiator of the project Na pomezí samoty. Other projects include Deep Space Gateway, Soundworms Ecology Gathering, 2017, and Architecture and the senses, 2018.

Miloš Šejn (1947, Jablonec nad Nisou) has been working in the fields of visual art and performance since the second half of the 1960s, and since 1992 he has been leading the multidisciplinary project Bohemiae Rosa, which focuses on research into the relationship between the human body and place. Currently, he focuses on immediate creative possibilities, based on the relationship between historical humanized landscape and integral nature. In addition to classically understood "artworks" presented in many collections, he is the author of numerous landscape projects and realizations in Germany, France and the Czech Republic www.sejn.cz.

Frank van de Ven (1961, Tilburg) is a dancer and choreographer. He worked with Ryszard Cieslak of the Jerzy Grotowski Collective, and spent his formative years with Mino Tanaka as a member of the Maijuku Performance Company. With Katerina Bakatsaki, he founded the training and performance platform "Body Weather Amsterdam" in 1993, which is based on a complex method based on the interconnectedness of body and environment. Since 1995, Frank has led the interdisciplinary project Bohemiae Rosa with Sheyn, linking body and landscape with art, geology and architecture bodyweatheramsterdam.nl.