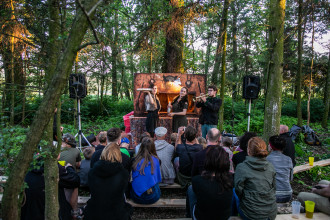 The Zvěřinec association was founded in 2018 by four people active in various cultural and artistic activities in Prague and Olomouc. 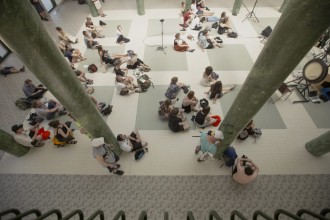 Not many people would consider Luhačovice to be a hub of contemporary art and culture.

The village of Šarovy is located in a specific cultural area on the border of Moravian Slovakia and Wallachia. Although it is basically an inconspicuous village with two hundred inhabitants located between two large towns, from a cultural point of view it is somehow essential. 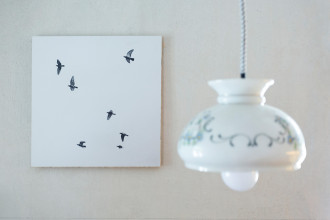 In the village of Šarovy, where in 2007 the sculptor Jan Ambrůz together with Pavla Kačírková began to implement the project Jinákrajina, which aims to place in the local landscape various sculptures and small interventions, the U cesty Gallery was established in 2013. 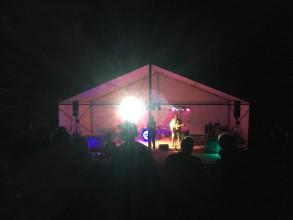 Since 2012, Bystřice pod Hostýnem has been home of the Okrašlovací a Zábavní Spolek — an association focused on the beautification of the locale and the entertainment of the locals. 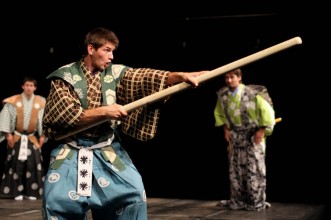 Fujaré is a cultural and production association which has been active in Rožnov pod Radhoštěm since 2016. It developed at the initiative of theater historian Honza Petružela when he returned to his native town after living in Prague for sixteen years. 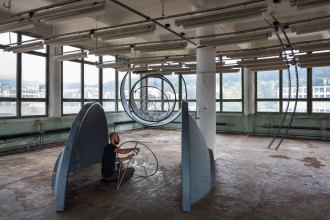 The Creative Environment in Post-industrial Architecture

Since the beginning of the 20th century, the Zlín region has undergone significant industrialisation and the associated development of education, crafts, amenities, infrastructure and culture. As industrial complexes grew, entire towns were created alongside them. But what happened to them after the closure of the large industrial enterprises?

Gravel is still an irreplaceable natural material in the construction industry, especially in high-rise and road construction. However, gravel resources are dwindling and several regions are experiencing shortages that will affect them in the future, the hardest-hit being the Zlín region. The company České štěrkopísky, s.r.o. has obtained a mining permit near Uherský Ostroh on the border between the regions of Zlín and South Moravia. The decision has been the subject of a dispute for several years, with complex arguments and opinions concerning the reasons in favour of mining on the one hand and the protection of drinking water sources on the other. Twenty municipalities have appealed against the mining, as well as the association For Water for People.

In September 2020, an ecological accident occurred on the Bečva River. Cyanides leaked into the Bečva and turned it into a dead river in some parts. According to Czech environmental inspectors, the biotope and conditions for all water-bound organisms were damaged over about 40 km of the stream in the section downstream of Valašský Meziříčí to Přerov. Some experts conclude that this is an irreversible loss. The topic of toxic pollution has been addressed for a long time by the association Arnika, which launched the challenge “Rivers without poisons” for clean rivers.

The Zlín region consists of three counties: Zlín, Uherské Hradiště, Kroměříž and Vsetín. The eastern, mountainous area of the Zlín region (White Carpathians, Javorníky and Moravian-Silesian Beskydy) constitutes the border with Slovakia. The landscape is hilly, and there are two natural reserves here: Beskydy and the White Carpathians, which contain a UNESCO biospheric zone with unique flora. The largest river is the Morava, and the region is very attractive for tourism, containing a wide range of natural, cultural and historical landmarks (mountains, spa towns, wine regions, historical monuments the remains of the former Great Moravia empire, as well as Baťa-era architecture, etc.). The region is associated with the fertile Haná area and has been stereotyped with the welcoming people of Slovácko and the hardy people of Valašsko. The level of cultural activity is very high, and Zlínsko is much celebrated for its traditional folk festivals. Along with the South-Moravian region, the Zlín region has the highest number of folklore collectives, and features the most folklore festivals in all of Czechia (ca 30 festivals).

The region’s main cultural center is Zlín. There is the Museum of Southeast Moravia with an exhibition presenting the era of Baťa industry. Zlín also has the Regional Gallery of Fine Arts in Zlín which exhibits contemporary art. This institution also organizes the Zlínský Salon Mladých which focuses on the most interesting works of artists under thirty years of age. Other notable galleries with a non-profit program are the Kabinet T., G18, Galerie Václava Chada, Garáž, or Komnata (a space placed at a local public transport stop). Another important institution is the Alternativa – Kulturní Institut Zlín working under the auspices of the municipality, and the Photogether Gallery which organizes lectures, exhibitions and concerts. A strong up-and-comer on the scene is the Zvěřinec multi-genre art society.

Another cultural center of the region is Uherské Hradiště. The city operates seven cultural houses, and a notable museum is the Museum of Moravian Slovakia along with its Gallery. There are three theaters, and the city is home to the annual Letní Filmová Škola, a festival during which the city celebrates film and offers a rich accompanying program.

Kroměříž is another notable cultural center, and its Archbishop’s Palace and neighboring gardens are part of the UNESCO world heritage. The Archbishop’s Gallery features a rare collection of Gothic and Baroque works. There is also the Museum of Kroměříž.

For the last ten years, the spa town of Luhačovice has been organizing the multi-genre festival Luhovaný Vincent. The same association organizing the festival is also the driver behind the Zvuková Mapa Luhačovic project which produces radio plays about the history of Luhačovice and its famous persons. Vizovické Trnkobraní is a great music festival which attracts all the region. Rožnov pod Radhoštěm features a unique open-air museum of Moravian-Wallachian culture, and is also home to the independent association Fujaré, as well as the 3. Etáž space in the former Brillo factory. Velké Karlovice have recently become the site of a new alternative film festival.