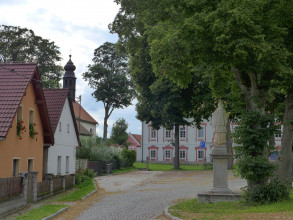 We’re a Kind of Platform

This is a community of friends from various fields who have a desire to meet and develop non-traditional events in the region and who largely draw on history and the particular needs of the local public. 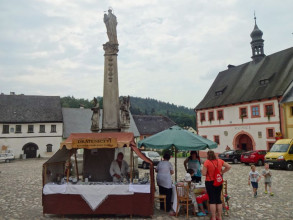 The Bart association has its headquarters in the historical town of Úterý, which is nestled in the picturesque valley of Úterý brook 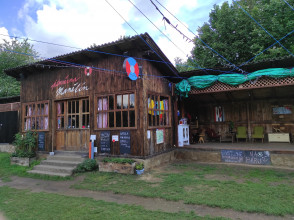 The association Baroko v Čechách is an open association whose aim in the past was to culturally revive the architecture and dispositions of the unique St. Anne’s chapel in Nečtiny. 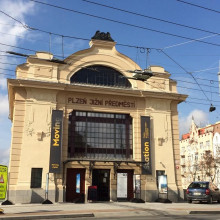 The aim of the JOHAN organization is to support independent artistic works, mostly in theater, dance, multimedia and the performing arts, at both amateur and professional levels. Their projects aim to increase the public’s interest in the world and the spaces we live in. 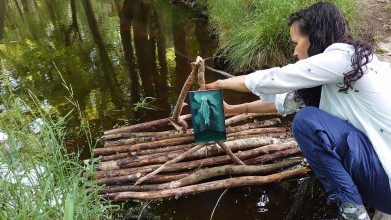 The Bolfánek lookout tower stands on Žďár hill, about 1½ km from the Chudenice township in the county of Klatovy. The tower provides a beautiful view over the wider surroundings, such as the Gabreta hills, the Böhmenwald, and the city of Pilsen.

On the “Mythical” Landscape of the Czech Germans

When the work Social Formation and Symbolic Landscape by the British cultural geographer and historian Denis Cosgrove was first published in the mid-1980s, it caused a stir in many fields of study. Although the ideas contained in the work were not entirely new, Cosgrove's text soon became the missing foundation on which the intellectual and ideological current dealing with the issue of landscape and space, which had so far stood rather in the background, relied.

Natural forests, very complex balanced ecosystems, have existed on our planet for millions of years. In contrast, foresters (as a professional group) have existed for only about 200 years. They are trained to plant and cut down trees. In fact, forestry education prevents foresters from truly understanding the functions of forests.

The Antikomplex association has been active in the Pilsen area since the 1990s, focusing on a critical reflection on Czech-German history, specific stories, changes in the landscape, relationships, dwellings, and views. It publishes, prepares exhibitions and workshops for the public, special educational events for schools, and other projects on the subject of Czech-German coexistence. MAS Český západ is also very active in the area, and support for various cross-border projects of the Czech-German Future Fund must also be mentioned, as well as the sociological study “Rediscovered Treasures of the Sudetenland“ prepared by the Centre for Community Work of West Bohemia in Pilsen.

Between 1992 and 1999, interdisciplinary symposia and festivals were held in the former Cistercian monastery in Plasy, which in the early post-revolutionary period made a significant contribution to linking Czechoslovak contemporary art to the Western and Eastern European context of that time. In collaboration with their initiator Miloš Vojtěchovský and many contributors, and with the support of the Foundation for Contemporary Art and the Czech Ministry of Culture, the Agosto Foundation has prepared an extensive multimedia archive containing publications, texts, photographs, sound recordings, and videos documenting the nature and course of the Hermit events.

Architecture and the Senses

Following the publication of the Hermit archive in October 2018, Miloš Vojtěchovský, in collaboration with the Agosto Foundation, prepared an interdisciplinary meeting in Plasy, which was mainly dedicated to sound. The seminar took place in the Mathey Hall of the Centre for Building Heritage with the support of the Pzeň Region. The papers presented touched on the intersection of architecture, art, ethology, social and environmental issues and addressed aesthetics, ethics and acoustics, geometry, architecture, nature, humanities and art.

Sound and the sonic environment was also the focus of the 2017 International Soundworms Ecology Gathering in Mariánské Radčice.

The Plzeň region is located in southwestern Bohemia and neighbors Bavaria. It is the third largest region in the country, yet the population density remains the second lowest. The regional capital of Plzeň is the fourth largest city in Czechia, but otherwise there are not many mid-sized and large cities. Plzeň is also the region’s cultural center. There are two universities, and the University of West Bohemia in Pilsen also operates the Ladislav Sutnar Faculty of Art and Design. Plzeň includes a number of theaters and theater troupes. It is also the seat of the Museum of West Bohemia, the Gallery of West Bohemia, the Gallery of the City of Pilsen and the university gallery of Ladislav Sutnar. The city also operates a number of multi-genre cultural institutions, such as the Papírna (concert hall, café, gallery, studios), Zastávka or DEPO2015.

Plzeň was chosen the European City of Culture in 2015, which helped activate its cultural potential across the region, and brought some rejuvenation and transformation of its cultural institutions. But after this temporary boost, many of the projects died down or transformed into smaller initiatives. Moving Station remains an important multifunctional center which is operated by the Johan society in the spaces of a renovated Pilsen train station. The support from the European City of Culture initiative made this community project into a professionally active institution. They mostly focus on theater production, but also delve into affiliated fields and always try to keep an educational dimension to their work. Apart from Pilsen and its environs, the region includes other notable counties: Klatovy, Domažlice, Rokycany and Tachov. Since 1989, Klatovy has been the home of the Galerie Klatovy / Klenová (formerly the Okresní galerie Klenová). The Museum and Gallery of North Pilsen in Mariánská Týnice near Kralovice is also an important cultural institution. Other activities are supported by smaller organizations, such as the Úterský Bart, Domaslav, Otisk or Pomozme si sami. The Plovárna Manětín cultural center is a small association focusing on the humanization of local culture, which however achieves regional impact. The Rašelina society has been a homeopathic force in the Šumava region, being a platform for art and taking care of local nature and the land. The Artmill art center has been active near Horažďovice, focusing on art and self-sustainability. The Propolis association in Chříč takes care of the Chříč brewery and organizes the annual multi-genre Křič Fest festival.

The renovation and upkeep of sacral sites in the areas formerly occupied by the German-speaking inhabitants is very important, and the region for example supports the project Západočeské baroko. Altogether, the region is still struggling with the expulsion of the former inhabitants and is trying to actively pick up on its original history. (Here we can mention for example the Zmizelé Sudety project of the Antikomplex society, as well as the joint project of the Centrum pro komunitní práci západní Čechy and the Centrum dalšího vzdělávání v okrese Cham – Znovuobjevené poklady Sudet.)

The Šumava National Park is one of the most important protected reservations (a part of it also stretches over territory of the Plzeň region), but there are other notable ones: Český les, Brdy, Křivoklátsko and Slavkovský les. The region includes a number of precious historical sites, and was the home of famous architect Jan Santini Aichel (Plasy monastery, Kladruby monastery). In the context of the Czech Republic, the region’s environment is generally less polluted (excepting Plzeň and the areas surrounding the D5 highway). The region’s ecological politics have had impact on the farmed land, whose total surface area is the second highest after the South Bohemian region. The education index is lower in the borderlands, as well as in the areas of Domažlice and Horažďovice. The intensity of cultural activity is surprisingly low in the counties around Plzeň, Nepomuk and Horažďovice. It is higher in the borderlands around Klatovy.