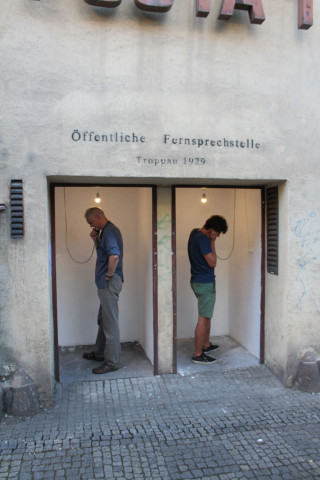 Bludný kámen is a collective which has been actively shaping Opava’s cultural space since 1995, organizing exhibitions, lectures, public discussion, and experimental music concerts. Between 1996–2003 they organized various cultural activities (concerts, literary readings, lectures, etc.) at the Univerzitní klub – čajovna Bludný Kámen in Opava. For ten years they operated the House of Art in Opava (1999–2008) where they organized over 250 exhibitions on a wide spectrum of contemporary visual art, also featuring international artists. Between 1999–2002, the House of Art also organized exhibitions at the neighboring former church of St. Václav. Between 2008–2009, Bludný Kámen operated the Galerie Albertovec of the Opava region. The collective also organized a series of international exhibitions, among them Na houby/for john Cage (2012), Body Varu (2013) and others.

They are currently curating a regular exhibition program for the Cella Gallery, as well as the open city space Hovorny, alcoves of former phone boxes, and also work in the Matiční dům in Opava. They furthermore organize events of Czech experimental, improvised and electronic music, also as part of the Pohyb–Zvuk–Prostor festival and the Minimaraton of electronic music, collaborating with the Gallery of Fine Arts in Ostrava, the Ostrava Center for New Music and the HearMe! travelling festival. Bludný Kámen’s main interests lie in mapping and presenting contemporary cultural and art production outside of the main urban centers. Currently, the collective’s core team consists of the original founder Martin Klimeš, as well as Jakub Frank, Matěj Frank, and others.