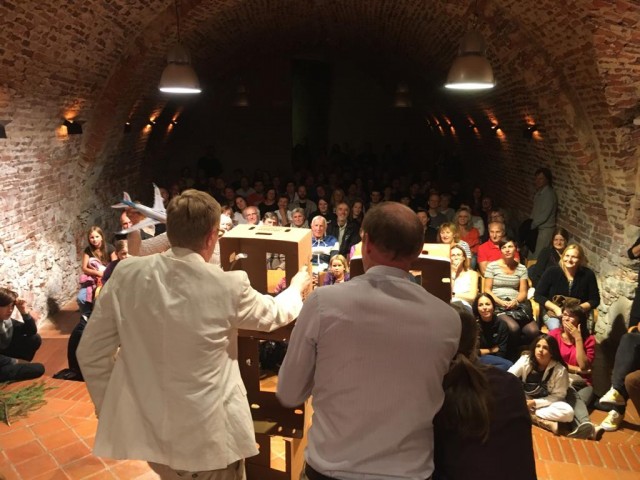 Třešťský průměr is an unusually active and creative group of peers from Třešť. The group was created by joining two similarly-focused theater troupes – Natvrdlí and Tylovi vrazi. They draw from an artistic as well as musical background — while the name “Natvrdlí” ironically cites the art groups Tvrdošíjní and Tvrdohlaví, they were founded a year before the foundation of the artistic group of the same name, although they themselves are not active in fine art. Members of Tylovi vrazi were predominantly recruited from a group of people active in fine art and music, but their medium is that of theater. The five members of Natvrdlí (Miloš Kameník, Miloslav Macek, Jan Makeľ, Jan Roháček, Lukáš Toman) and the trio Tylovi vrazi (Jiří Reiterman, Jan Morkus, Tomáš Niederhafner) found common ground in their humor, similar to that of Divadlo Sklep. They were brought together by the artist František Novák, who is not a member of either group, but has occasionally acted together with them, as well as playing in the band Lajky, consisting of some of the same members and founded about four years before. By joining a few of these unusual activities, they formed Třešťský Průměr, a group which made Třešť, a town mostly known for the crafting of nativity scenes, into a local cradle for culture, barely rivaled by the cultural scenes of all Czechia’s metropolises put together. Despite their epic output, the group prefers to perform largely in and around the region, in the traditional cultural spaces of forgotten Vysočina villages, and in various alternative spaces, such as the Třešť Parish Riding Hall. The central dramaturge is Miloš Kameník, who has written over a hundred original plays, “tableaus” and sketches, often addressing contemporary socio-political situations.