Summary: The following text consists of excerpts from a discussion about the threat of the renewal of Uranium extraction in Vysočina. The discussion was a part of the 2016 Frontiers of Solitude exhibition in The Vysočina Regional Gallery in Jihlava.

Lucie Stránská, Our Future without Uranium: “The dust from the mine is a problem. The study states that dust-free roadways will be designed, that dust sources will be scrubbed and dealt with by dispersion, but this radioactive dust will travel for several kilometres. We have pointed this out, but it was not acknowledged by DIAMO, and also not during later discussions, and on the basis of the study the government decided to go ahead with the approval process.

“How do we protest: when we came back from the debate in Jihlava, we realized that we should do something, that if we don't speak up, the approval process will run its course and we won't be able to retroactively enter any proceedings. So we met with about eight people, we were thinking about what we were going to do, and one of our friends said, I have a spray can, so then some ‘unknown‘ person spraypainted the main road in front of the planned mine site. That was the first protest action.”

Aleš Bořil, Mayor of Brzkov: “(…) the mine in Brzkov started in 1976, when it was found by gradual measurements that there was uranium, and on the basis of the measurements it was decided that there would be exploratory mining. Since 1992, the uranium mine has been rehabilitated, flooded, a concrete slab has been made, and it took about ten years until 2002 to recultivate the whole mine; the recultivation cost about 10.5 million. In our community and surrounding communities, people perceive this to be a problem from the past.”

Edvard Sequens, Calla Association: “I am mainly involved in the nuclear waste issue, but we also dealt with Rožná, years ago, sometime towards the end of the millennium, there was an assessment of the possible pumping of tailings water into the mines, and we discussed with experts what the risk was.

“What's happening here at Brzkov is an effort to look at the future of our uranium industry, which has been very strong. The Americans and the Russians were trying to get into the Ore Mountains after the war, the uranium arms race was starting.

“I think that if Brzkov can be saved from uranium mining, it will only take a year or so and mining will definitely end at Rožná. 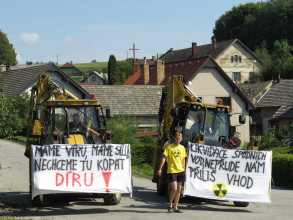 Edvard Sequens is the chairman of the non-profit association Calla, the Association for Environmental Preservation in České Budějovice, where he works as an energy consultant and project manager in the field of energy. He graduated from VVTŠ in Liptovský Mikuláš, majoring in automated control systems. He worked in the Independent Expert Commission for the assessment of energy needs of the Czech Republic and also as an external advisor to the Minister of the Environment. He is currently a member of the Sustainable Energy Committee of the Government Council for Sustainable Development. He was also elected as Secretary of the Platform against Deep Sea Storage, which brings together 51 towns, municipalities and associations.